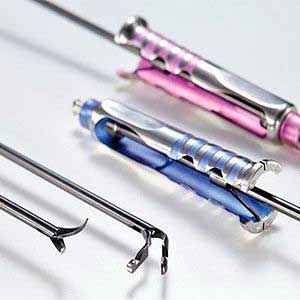 The AMS 700 LGX PRECONNECTED IZ MOMENTARY SQUEEZE™ is a tricomponent hydraulic penile prosthetic made of pure silicon elastomer, with variable volume with one connector, consisting of:

It is used for the definitive treatment of erectile impotence and is implantable by suprapubic or penoscrotal surgery.

It is operated hydraulically. By means of the pump, liquid is tranferred from the reservoir to the cylinders.

The distinctive feature is that the cylinders, formed by three liners, from a position of absolute natural flaccidity, expand in perfect adherence to the corpora cavernosa, thus obtaining turgidity of the penis. The LGX model has the characteristic, unique in its genre, beyond increasing the circumference, of increasing the length as well, by 15-20% of the length of the cylinders.

The Momentary Squeeze Pump™ has the advantage of its small size and the power to deflate the cylinders in a very short time (the deactivation button must be held down for 2 seconds), and it is also equipped with an anti-reflux valve to prevent self-inflation.
The pump is activated using only one hand for greater patient comfort.

This makes it a prosthetic of choice to address not only the cases of impotence caused by vascular deficits, but also reconstructions, and diseases such as Peyronie’s disease.

*Parylene™ (AMS registered trademark) is a medical grade polymer designed to reduce wear due to friction and to protect the surface; the improvement of performance and wear resistance is about five times superior that of non-coated prosthetics; the Parylene° is applied without alteration to the design or performance of the device

**InhibiZone™ (AMS registered trademark) is an antibiotic surface treatment, based on minocycline and rifampin, with which the surface of the device is impregnated, using a patented treatment process. Once implanted, antibiotics elute from the device, spreading the activity of the antibiotic on the surface and in an area surrounding the device. InhibiZone dispenses the antibiotics exactly where they are needed: the site of implantation. Studies show that most of the rifampin and minocycline elutes within the first 7 days, then continuing with a minimal elution for up to 28 days. This way it is ensured that the device will elute with the same profile every time. InhibiZone has shown broad spectrum activity against gram-positive and gram-negative organisms, and is particularly effective against staphylococcus.

Among the many causes of ED, we recall several of an iatrogenic nature, such as radical prostatectomy and cystectomy.

The solution for the functional recovery of a sex life when the patient does not respond to drugs is represented by the implantation of a hydraulic system.

The system consists of three elements, all of which are entirely implantable via a small incision: the cylinders, the pump of de/activation, and a reservoir.

The latter, which feeds the implanted system, is of fundamental importance and utility.

In the above operations, Retzius’ space, the natural home of the reservoir, is not very receptive due to the scars left by previous surgeries.

The problem was to find a reservoir that could “adapt” to the space available, and finally a new reservoir has been made called CONCEAL, which, rather than being spherical or ovoid, is flattened into a low profile, allowing for a fit in the remaining space; also, in addition to its particular configuration, it is coated with an antibiotic combination of rifampin and minocycline to reduce the risk of infections.

The AMS 800 device is used for the treatment of urinary incontinence due to a resistance in the flow of urine in the urethra/bladder (intrinsic sphincter deficiency) in male, female, and pediatric patients.

The placement of an artificial sphincter for sphincter insufficiency allows for the attainment of satisfactory continence in 80-90% of cases. It simulates a healthy sphincter, in the sense that it keeps the urethra closed until there is a desire to unirate. It consists of three components: a cap, which envelopes and closes the urethra, a pump, situated in the scrotum to deflate the cap, and a ball reservoir. These components are connected by flexible tubes.

By using the site, you accept the use of cookies on our part. More information